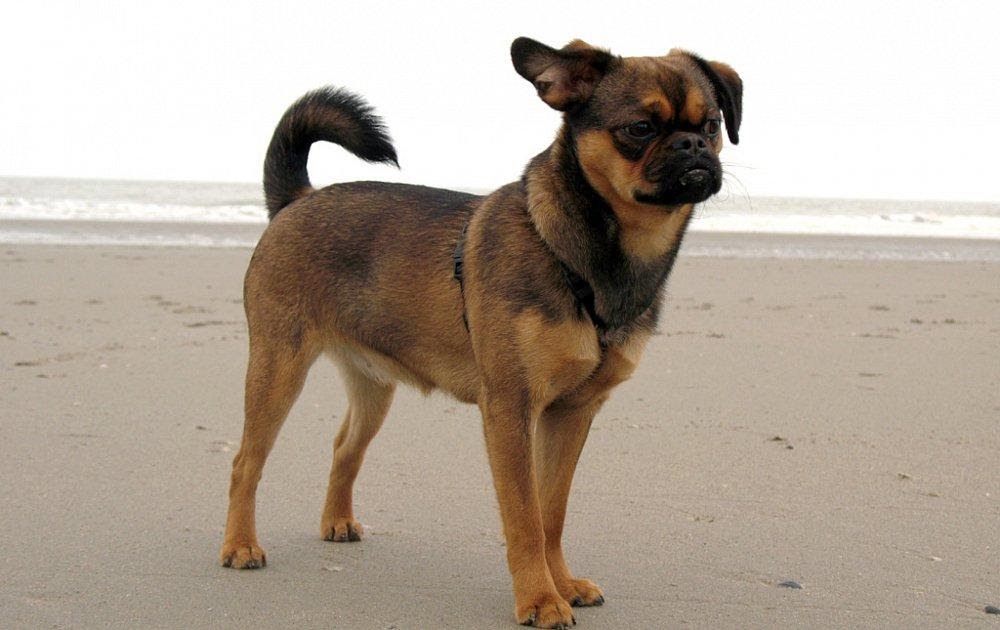 Petit Brabancon is a small dog belonging to the Brussels Griffon breed. The Second World war reduced the livestock of this dog to such an extent that today this is a rare and expensive breed.

This dog was initially bred in the 19th century from the Smousje. It was used to catch rodents in stables and homes in Belgium. Its origin also includes the Affenpinscher. Initially popular amongst the peasants, this dog was allowed to ride shotgun with its master because of its loyal and affectionate nature. It was much larger in size then. It caught the attention of the French and Belgian royalty like Queen Henrietta Maria and Queen Astrid. Royal patronage added to this dog’s popularity, and it was bred to become miniature-sized toy dogs. The Brussels Griffon mated with the Pug resulted in the Petit Brabancon, the smooth-coated variety of the Brussels Griffon.

This is a smooth-coated species with a rounded head that is well-proportioned to the rest of the body. It has a flat simian-like face that has no wrinkles or extra skin. The eyes are relatively large and round or almond-shaped. They are black or brown, although occasionally you will find amber or light brown eyes. When it is looking straight, the white of its eyes is seldom visible. The small ears are set high and apart. They may be button ears or semi-erect. They may even be cropped short and pointed. Although short, the muzzle is broad and deep. The jaws are strong and well-structured. The tongue and teeth are never visible when the mouth is shut.

The nose is black and tilted slightly back with the nostrils set wide apart and well-opened. The body is sturdy with a broad, deep chest, giving it an air of confidence. The feet are compact, oval, or round with well=arched toes and pads that are tough.

This dog tends to shed hair throughout the year, mainly when it grows a new coat in spring and autumn. You will need to brush your pet’s skin a couple of times a week to remove dust and to maintain the sheen of its fur. It will enjoy an occasional warm water bath but do not bathe it in winter because it might catch a cold. Clipping and trimming every few months is also necessary. Regular trimming of nails will prevent them from cracking or breaking.

Its ears and teeth require special care and need to be cleaned with a soft damp cloth.

It would be best if you got its eyes checked regularly since it has a propensity to catch eye infections, develop cataracts or glaucoma.

Cleft palates are common among this breed, and this causes milk to dribble into the nasal channel and the airways. This should be corrected by a surgical procedure as early as possible.

This dog is sensitive to the Leptospirosis vaccine and also prone to degenerative disc disease.

Like other dogs of this breed, the Petit Brabancon, too, has difficulty birthing because of the size of the puppy’s head. A caesarian section is a good option.

Good quality dog food or home-cooked food like meat, vegetables, cereals, and dairy that is recommended by a vet is what it needs. The quantity of food should be carefully monitored since it tends towards obesity. A pup needs to be fed 3-5 times, while twice a day usually is sufficient for an adult. Please keep an eye on its calorie consumption to prevent it from overeating. Clean and freshwater should be available all the time.

Formerly vermin hunters in stagecoach stables of Belgium, the Griffs are popular, although rare, lapdogs today. The Petit Brabancon is the most unique of three Belgian Griffons, the small Brabant Griffon being the least common. Although famous in Europe for centuries, it has also become trendy in the United Kingdom because of its charming nature. The elderly, in particular, enjoy its loyal and entertaining company. This energetic, playful, loving dog is suitable as a therapy dog too.